by tuan kuranes
A viewer for Ogre Mesh and Materials.

Intended for programmers, in order to inspect their models, full of features and nearly no usability... 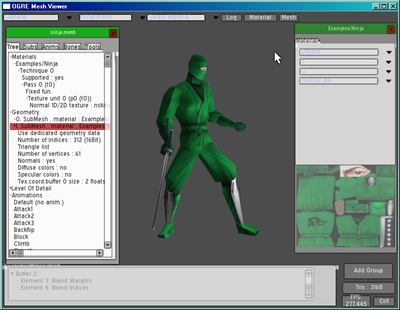 Nice. Is it possible to make the window resizeable?
by martignasse
nice one

and a good "in situation" test for the Marti skin, you made good work with the tab widget (who isn't very finished due to the way falagard map image for the widget)

Did you made any change to the skin itself, or are you in need for some ?
I'm interested and can help with pleasure.
by tuan kuranes
@baxissimo: both windows are resizable.

@martignasse: Didn't made any changes, was pretty complete as is.
Only problem is indeed Tab button sizing itself vertically... which is perhaps a cegui problem.
I should have a "gui usability rethinking" session before adding anything.
Only planned things is to add some buttons in inmageset (usual set of save/open/etc...), but in a separate imageset.
Thanks for offer !
by baxissimo

Not sure what you're talking about, but I'm talking about the window frame inside which your whole program lives. It seems to be a fixed resolution. It captures the mouse first of all so you can't get outside the program's frame, but even if you alt-tab away (on Windows) to escape from that mouse grabbing behavior the window's frame is still not resizeable.

Anyway, I don't think it's easy, and that's why I was asking. Even if you don't grab the mouse, and make the frame resizeable, the default resize behavior is to stretch everything out, which may be fine for a game, but, I hope you will agree, it's just not the way any sane desktop app should work.

I'd like to see it become easier to get desktop-app like behavior out of CEGUI and Ogre both. That will be a big help to everyone who wants to write mesh viewers, mesh editors, modelers, etc with CEGUI and Ogre.
by scriptkid
Hey Tuan,

by tuan kuranes
@baxissimo: sorry misunderstood.
Ok, sorry, so yes, that's a problem, and that can be overriden, setting cooperative mode on mouse in ogre platfom_manager, and handling "resize" event, which basically mean (under DX at least), unload entire scene and reload it once resized. On OpenGL, you can just change rendertarget size.

So it's possible and not that much work, but if you aim at "become easier to get desktop-app like behavior", then what you must do is a framework, Linux and Win32 compatible that handle this , then each tools maker would use that framework.

If you want to make one, I can help you (Ogre people too, try to ask for interest in a ogre post).

Only problem is indeed Tab button sizing itself vertically... which is perhaps a cegui problem.

yep, there is essentialy to bad things in the way tab widget is mad for now.
The height of button tab are proportionnal from the whole widget height.
The image mapping isn't very flexible to make different look.

I should have a "gui usability rethinking" session before adding anything.
Only planned things is to add some buttons in inmageset (usual set of save/open/etc...), but in a separate imageset.

it's why i asked

Can be a good time to polish things (if you plan to use the marti skin in future, of course).
speaking about icons, i have some i wanted to use especialy with the marti skin, here it is (basicly from xnview, if i remenber) 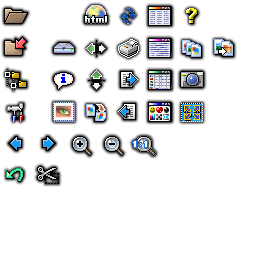 Use it if you want, i have a psd file if you need.

In any case, keep up the good work

by tuan kuranes
Very Nice, I'll use that if it's ok with license.
by martignasse

tuan kuranes wrote:Very Nice, I'll use that if it's ok with license.

cool, so i have to verify from where i pick them and after that, i'll make the psd available.
All times are UTC
Page 1 of 1
Powered by phpBB® Forum Software © phpBB Limited
https://www.phpbb.com/